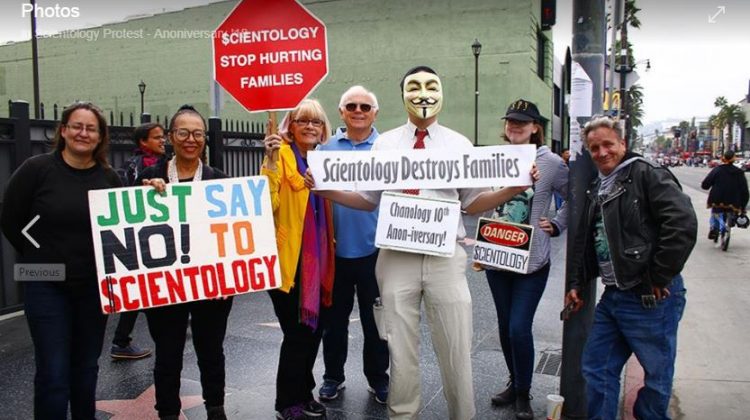 Aside from displaying protest signs in a shop window, there are other ways to do it.  Early escapees often picketed in front of Scientology buildings in pre-internet days.  With the advent of the internet age, Anonymous made an art form out of it, coordinating their first picket in chat rooms online.

The result was that over 9,000 people around the world came out and picketed whatever org was in their town, all on the same day.  That action gave hope and emotional support to a lot of people, including me, and was the beginning of the end of the terrified feeling I used to have.  I’m forever grateful for that.

There’s a trick to their fair-gaming.  Before you ever think of leaving, they’ve planted the idea of what will happen to you if you do.  You can go online and find their so-called Manual of Justice, where they mention the terrible fate that awaits anyone foolish enough to leave.

So when you finally do leave, you sit there on pins and needles, as if waiting for the other shoe to drop.

They fix it so you do it to yourself.

People start to disconnect from you, and you begin to anticipate and fear what’s coming next.  I happen to believe that you create your own world with what you think about.  So with enough of this anticipation and fear going on in your mind, it doesn’t take much for them to drive you into a state of terror.

For instance, somebody broke into my shop a couple of times and moved some things around, just enough so I’d notice.  Nothing was damaged, and nothing was missing.  But it was enough to give me bad dreams.  And it reinforced the anticipation and fear.  If I had gone on that way, who knows what might have happened.

So for me, Anonymous showed up just in time.  I got out there and joined them — and didn’t even wear a mask.  The purpose of the mask is so they won’t be able to fair-game you, because they don’t know who you are.  So what would have been the point?  They were already doing it to me, whether I was protesting or not.  So I figured I might as well protest, especially when I had 300 people doing it with me.

You can protest the abuses of Scientology.

Some people protest through blogs, podcasts, videos, and forums on the internet.  The first person who comes to mind is Tory (Magoo44).  She has thousands of followers on YouTube.  She told me, when I was thinking about coming out as an ex-Scientologist, that the more she speaks out against Scientology, the more they back off.

I’ve found that to be true, and it’s so typical of bullies.  There’s nothing to be afraid of by speaking out and nothing to be gained by not doing it.  When I was being quiet, they were fair-gaming me anyway.

And you don’t have to be an ex-Scientologist to protest the abuses of Scientology. Click To Tweet Tony Ortega does it all the time at his Underground Bunker.  The community that flocks to his blog is warm and welcoming, for the most part.  Of course, you’ll also find the occasional troll — probably some Scientologist in disguise.  But they don’t gain much traction there.

And of course there are the forums — ESMB and Operation Clambake — where I got much of my information as I was making my escape.

You can join these kinds of protests simply by exercising your Constitutional right to free speech.  Join the conversation on the forums or in the comments section of the blogs and video channels.

Others — folks braver than me — protest through lawsuits, though this method is fraught with risk.  Scientology has perfected its abuse of the legal system, so they have the home field advantage in that game.  Their objective in a lawsuit is not to win, but to harass their opponent and “destroy him utterly,” if they can.  They do it by outspending the opposition and dragging out the case, until the other side can’t stand it any more (or runs out of money)  and folds.

However, they shot themselves in the foot when they tried it with Debbie Cook.  She was airing too much of their dirty laundry in court — which is now a matter of public record (heh!) — so they had to settle out of court to stop her from doing that.  So even that venue is falling apart for Scientology.

The fourth way to protest the abuses of Scientology is completely unique.  Leah Remini’s “Scientology: The Aftermath” show is in its third season on A&E.  We can’t all be TV stars, but there is a way you can be part of the Aftermath movement.

Get some Aftermath cards and start putting them out in places where Scientologists can find them.  If you’re still on their mailing list — and if you’ve ever bought a book from them, you are — you can send them directly into their organizations in those handy business reply envelopes they send out with their mailings.  You’ll directly reach the people who open the mail.  So contact the Aftermath Foundation.  They’ll send you the cards for free.

Protesting the abuses of Scientology isn’t scary at all.  You can do it simply by exercising your right to free speech and by telling the truth of what you know about the Scientology organization.  And unless you’re brainwashed, like I used to be, it’s bound to be bad.