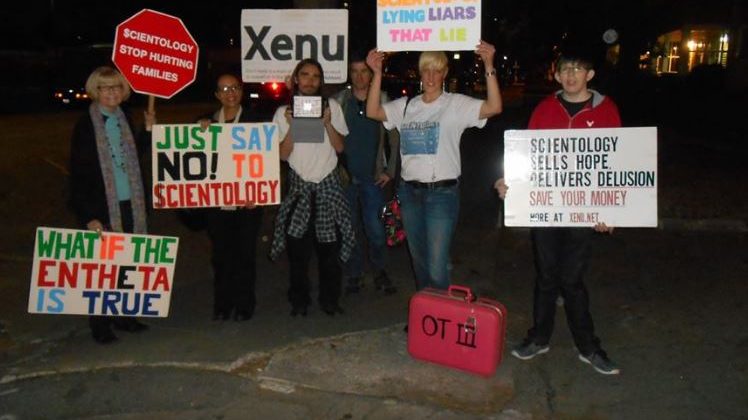 Scientology events occur several times during the year.  In the beginning of the Anonymous era — which has continued to evolve, by the way — but in the beginning, we would find out when and where they were holding the event so we could go there and picket.  Scientology used to try to keep the location secret at first, to avoid the protesters.  It was a game of hide and seek for Anonymous.  That was always great fun.

For the protests, somebody would bring a boom box, and we’d dance in the streets.  Even the LAPD, who were there to maintain order, found the protesters pleasant at the events I attended — in contrast to the Scientologists, who would make alarming reports to the effect that, “OMG, there are people out there, terrorizing us.

In the eyes of the police, Scientology must have started losing credibility right then.  I’ve been at some protests where there were four or five of us picketers, doing a “flash raid.”  Scientology, with hundreds of people on the premises (which had to be locked down, for fear of exposure to the truth), called the police.

The police sent a patrol car.  When they arrived, they saw a few people cheerfully holding signs.  Mine said, “What if the entheta is true?”  All the police did was get out of the car to ask me what “entheta” meant.  We explained it to them, and then they got back in the car and drove off, as if to say, “OK, Scientology.  You’re on your own.  There’s no threat here.”

I can just imagine what they must have been thinking — “With all the life and death situations going on in this town, they call us for this?!?!?”

The flash raid wasn’t at a major event.  It was just a few of us getting together to tell Scientology we don’t like their abuse of people.

But the big deal major events are:  (1) L. Ron Hubbard’s birthday in March; (2) the May 9th event, celebrating the publication of the Dianetics book; (3) Auditors Day in September; (4) the IAS (International Association of Scientologists) event in October; and (5) the New Year’s Eve event in December.

They also have a series of events in late spring and early summer to celebrate the anniversary of the Freewinds Maiden Voyage.  That’s a smaller event, since it’s aimed at their “elite” members who are prospects for buying — oh, yes!  They are perpetually selling something — the highest level of processing (Operating Thetan 8), which is only delivered on the ship.  So it’s a major enough event, because what they’re selling at the Maiden Voyage event is some of their most expensive stuff to some of their most moneyed members.

They also sell stuff at the other events.  Otherwise, what’s the point of having an event at all?

Back when old L. Ron was alive, he would always put on a Scientology “Congress,” to announce a “breakthrough” in his research of “the tech.”  He would invent new drills to train the Congress attendees, who would gain status by being the first to know about the latest and greatest that Scientology had to offer.

After old L. Ron died, they had a problem.  He wasn’t around anymore to make the breakthroughs, and the Scientology public wouldn’t accept breakthroughs made by anyone else.  L. Ron Hubbard was the one and only “Source” of Scientology.  Anything else from anyone else was an unauthorized alteration.  So they have no mechanism by which they can evolve.  They’ve planted the seeds for their own extinction.

They’ve also made themselves extremely predictable.  Simply by reading up on their policy, you can deduce what they’ll do in any circumstance.  Old L. Ron presented himself as an all-knowing genius — an expert on every subject under the sun.

There’s even a policy on how to wash windows.  I saw it when I was on the Apollo, where the Flag Orders written by old L. Ron have the force of policy.

Anyway, in recent years, instead of a technical breakthrough, they have to come up with a “new release.”  At one event, they told the story of a special mission being sent to the Founding Church in Washington, DC, where old L. Ron spent several years with his family.

And hark!  In a box in the basement, unearthed from a closet under the stairs, they found unreleased notes written by The Old Man himself.  So the foremost technical authorities in Scientology got to work compiling these notes and ta-dahhh!  Tonight for your exclusive enjoyment, you can be the first to own this priceless technology for only umpty-ump thousand dollars!

So that’s how Scientology events go, culminating with the guy onstage shouting “hip-hip,” and the audience responding, “hooray,” three times, with the obligatory standing ovation at the end.

I didn’t mention all the other standing ovations that are part and parcel of a Scientology event.  David Miscavige thrives on them.  If you’re not giving a standing ovation, you’re being disrespectful.  There is no middle ground.

So for these five or six Scientology events during the year, every Scientologist, whether working inside or outside of the org, is expected to drop everything to come and stroke Miscavige’s ego.

And that revelation was another step on the road out of Scientology for me.