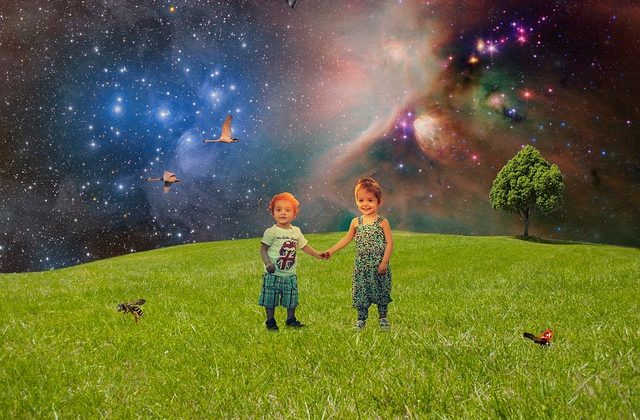 Old L. Ron constructed a bubble universe when he invented Scientology beliefs.  The whole belief system has a certain internal logic all its own, but the minute you change anything about it, it tends to fall apart — which is why he had to write a five page policy (“Keeping Scientology Working”) about how you’re never supposed to alter any part of it.

Oddly enough, when you try to apply it in the real world, it doesn’t quite fit.  It’s hard.  Generally speaking, people don’t like it.  Something about it eventually ends up rubbing them the wrong way.

Here’s the thing.  Everyone, from the most woo-woo mystics to the most imaginative science fiction fans to the most logical quantum physicists, believes that we are all connected.

Star Wars fans are no strangers to the idea that there is a “force” that permeates the Universe and exists all around us.  Mystics will say it’s what animates us, gives us life and what leaves us at the moment of death.  Quantum physicists will explain it in terms of “quantum entanglement.”

This is all a matter of opinion, of course, because nobody can give you anything solid that you can hold in your hand that would represent “proof.”  But to me, all these opinions lead me to believe we are all a part of one Force.  We’re all connected.  And when telepathy apparently exists, it’s just us tapping into the Universal Consciousness, or the collective unconscious.

No matter what you want to call it, it all points to the connection that exists between all beings.  Old L. Ron couldn’t have that.  If people thought they were all connected, then they could gang up on him and oust him from power.  No.  To his way of thinking, it was better to make people think they were individual “thetans” — the better to control them, my dear.  The better to cut them out of the herd and banish them, if they got unruly.  The better to consolidate his own power by introducing the idea that some individuals were “bigger” than others.

Big Beings.  Bulldooky.  We’re all infinite.  But he couldn’t afford to let us think that, could he.  Not if he wanted to be seen as the most powerful, the Biggest Being of all.

He was a writer.  So he knew a reader will fill in the blanks to make a story have continuity.  He came up with the concepts he wanted to put across and let the rest of us use our considerable imaginations and mental gymnastic ability to make it all fit together.  Then he stole the ideas that did it best and made him look like a genius.

Even Christianity, a relative newcomer in the field of religions, allows for the spark of divinity in every person.  They call it the Holy Spirit, which is part of their God.  They believe we’re all part of God.

But then this red-headed @$$&#)* comes along and tries to make a lie out of that, saying we’re all individuals, and some of us are bigger than others, and he’s the biggest one of all.  He doesn’t come right out and say if, of course.  That would be bad form.  But if somebody else says it, he doesn’t contradict them either.  He just sits back, smiling smugly, accepting the adulation.

So that’s how you get to be a god in your own lifetime.

We’re all infinite.  And that’s the big secret Old L. Ron didn’t want us to know.  So he had to keep us distracted, chasing “OT Powers” and moving “up the Bridge,” when all we had to do was look within and see what we already have.

But in Scientology, Old L. Ron made looking within taboo.  You were supposed to keep your attention extroverted.  Looking within would drive you nuts, according to him, and you don’t want to be nuts, do you?

“Self-auditing” is a no-no, unless you’re doing it the way he says to do it.

Looking within would also eventually lead you to recognize your true infinite nature and might blow the transient Scientology beliefs out of the water.

It’s very hard to “keep Scientology working.”  The reason it takes so much effort is that it’s based on a lie that fails to acknowledge the interconnectedness of all beings.  If we’re all connected, then it’s impossible to set up an “us-and-them” dichotomy.  You wouldn’t be able to rally the troops around some external “enemy” to fight against.  You couldn’t raise money for a “war chest.”  The idea of not being able to rally the troops and raise money is subversive in Scientology-world.

So Old L. Ron had to set up Scientology beliefs to suit his own purposes.  It took him millions of words to explain it, when you could probably come up with more truth just sitting quietly in meditation, using no words at all.