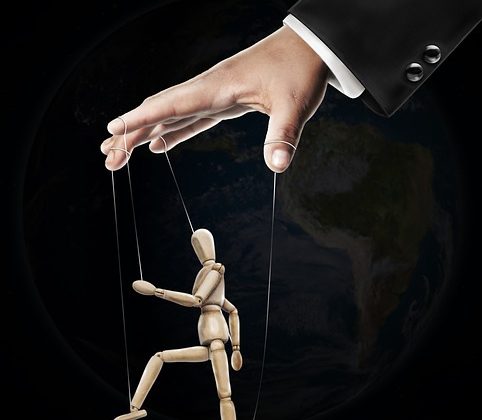 This week, when I was feeling emotionally manipulated on Facebook, I decided to dig around and see how this could be happening.   Facebook is emotionally manipulative.  So are some of the people on it.  They know that people don’t make decisions logically.  They make them emotionally.  Then they use “logic” to try to justify an emotional decision they’ve already made.  This is why all the logic and truth in the world isn’t going to change anyone’s mind on Facebook.

But maybe if you shake people up a bit emotionally, you can cause their thought patterns to fall apart and then come back together in a rearranged pattern.  If you do this though, be ready for the resulting emotional fallout.  People will come at you with all kinds of stuff.  So this week was all about the most emotional subject I could find — outside of politics and religion:  disconnection.

Disconnection — or the threat of it — is one of the world’s most effective devices for controlling people.  In the Scientology cult, people know if they don’t knuckle under and toe the line, they can be declared a “Suppressive Person,” and their friends and families will shun them.  On Facebook, you can be banned or put into “Facebook jail,” if your posts violate — who knows what.  In both cases, people have seen it happen many times to many people.  And they don’t want that.

In the Scientology cult, people will stay — day after day, month after month, year after year — even though they no longer want to be a part of what’s happening all around them.  Being an “under the radar” ex-Scientologist is a miserable existence.  But the alternative — the loss of friends and family — is “too gruesome” to contemplate.

Old L. Ron has even written policy on it — on how to make people do what you say.  Just make the punishment for disobedience “too gruesome” to consider.  So Scientology executives sit around thinking up these “too gruesomes” so they can get compliance to some insane order or other.

Disconnection is the ultimate “too gruesome,” and a little of it goes a long way.

I got considerable emotional involvement on the subject of disconnection, mostly from people who are deeply involved in Scientology cult thinking.  Here are the highlights.

Person A.  When I showed him his logic would lead to a non-survival outcome, the cognitive dissonance was just too much for him.  Something had to give, and it was damn sure not going to be his precious belief system.  Those ideas have been drilled into him for decades. 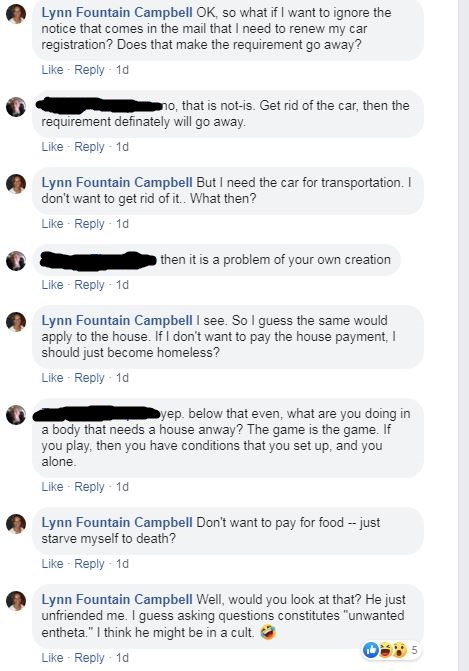 So the thing he had to get rid of was me.  He unfriended me, rather than stop drinking the kool-aid.  And this is what I mean, when I admonish you to be ready for the emotional fallout.  He made a decision in the heat of the moment that is pretty much irrevocable.  I mean, can you see him sending me a friend request after this?  But this is the mindset these people get into.  He’d rather lose a friend than even consider changing his mind.

Person B.  He says Person A’s “solutions” “are not doable for the average human!  But in my few interactions with him, I have found him sensible.”

When you’ve been around Scientology cult members as long as I have, you’ll recognize the attitude — that they are superior and “sensible,” while I’m only an inferior “average human,” who couldn’t possibly appreciate Person A’s “sensible” solutions.  And gee, it only took him a few interactions to catch on, superior being that he is.

Then there was Person C, who couldn’t engage me with any original thoughts of her own, but instead threw Scientology reference material at me — and it must be true, because Old L. Ron says so, and I need to study up on it — shrilly insisting on the right to refuse communication that is “low-tone, i.e., full of lies with an intent to enturbulate.” 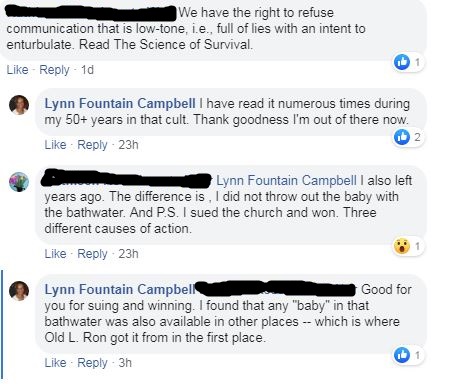 Lies?  I wasn’t telling any lies.  I was asking questions.  Any enturbulation (mental upset or discomfort) that may have ensued would have come about when those questions smacked up against a conflicting belief that created cognitive dissonance.  All you’d have to do to get rid of the discomfort is to examine the belief.

But no.  Cult members would rather hold on firmly to their unexamined beliefs.  Life made simple.  All the thinking has been taken out of the equation.  The thoughts are predigested and spoon-fed to you.  Life is so simple when all you have to do is what Old L. Ron says — never mind the fact that he died of a stroke, alone and on psych drugs.  All the Scientology in the world couldn’t save him.

Then she goes on to say I’ve thrown the baby out with the bathwater.  Somehow that’s not as lofty as sifting through the turds and trying to pick out the raisins among them, as the late Arnie Lerma used to say.

She claims to be “out” of Scientology, but she still holds unexamined beliefs she won’t let go of long enough to have a normal conversation.  She’s still stuck in always-attack-never-defend mode.

Notwithstanding all of the above, she hasn’t disconnected, unlike Person A, who’s drowning in the kool-aid.  As long as she’s sticking around to argue with me, I want to continue to believe there’s hope.

Oh yeah, I almost forgot about Person C’s ridicule — “Oh for Chrissake.  Get off that horse’s back before you break it….”  Similar to what Trump supporters say when you mention racism — “Oh you’re playing the race card?  Sheesh!” — as if the racism didn’t exist, and it’s ridiculous of you to imply in any way that it does. 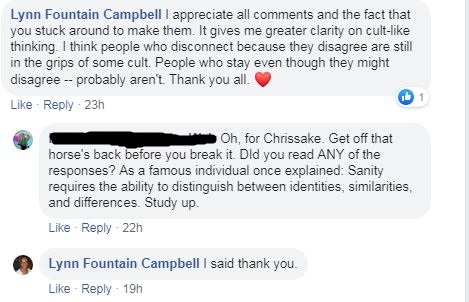 But in fairness to all three of the people above, I’m not mad at any of them.  They’re being emotionally manipulated too — whether by Old L. Ron or by Trump.

Trump supporters know people make their decisions based on emotion, and they get their kicks watching “the left” go crazy, getting sucked into arguments based on false premises and trying to change people’s minds with truth and logic.  It’s not gonna happen.  The decision has already been made on an emotional level, and all the truth and logic in the world is not going to dislodge it.

My epiphany in all this, now that I can see what’s happening, is that I don’t have to be manipulated by it anymore.  I don’t have to unfriend or block anybody.  If they make an incendiary comment on my wall, I can just let it sit there, ignored.  If they try to suck me into an argument, I can use the “haha” icon.  I don’t have to defend myself against something that’s based on a lie in the first place.  If all else fails, I can go off and meditate for a few minutes and come back serene and refreshed in the meditative afterglow.

They might be able to control many things, but they can’t control how I choose to react.  Or not.

Meanwhile, they can disconnect, unfriend, and block folks all they want.  They might then get unanimous approval and agreement from their group.  But it will be from a smaller number of people.  Heh.  Works for me.

P.S.  Cult think can get deep.  I once knew a Republican Scientologist Amway business owner.    You can see three different layers right there. 😀