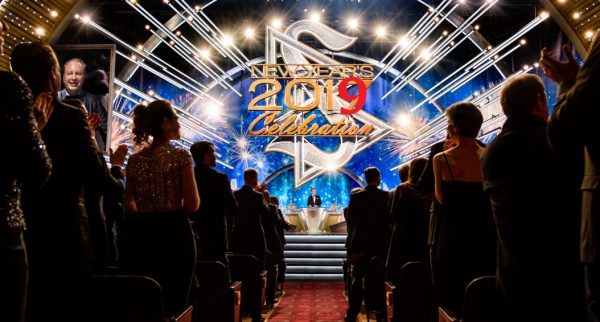 Scientology has several major events during the year, with lots of razzle-dazzle and free food afterwards — bread and circuses designed to lull you into thinking they’re the greatest thing since sliced bread, and to soften you up for when they put the moves on you to relieve you of your money.

The biggest Scientology event of the year is L. Ron Hubbard’s birthday celebration, which is usually held on a Saturday night close to March 13th, which is old L. Ron’s actual birthday.  They used to hold this event at the Shrine Auditorium.  One of the first indications, years ago, of Scientology’s shrinking membership was the fact that they couldn’t fill up the Shrine anymore.

At one of the last events I went to at the Shrine, there were ushers preventing people from going into the balcony seats.  If too many people sat in the balcony, there would be gaps in the orchestra section, where the cameras were focused, implying — heaven forbid! — that the event was sparsely attended.

The most recent Birthday Event took place about a month ago.  It was at the Dolby Theater in Hollywood, so they don’t even try to fill up the Shrine anymore.  They know they can’t.  The Shrine seats 6300.  The Dolby only has 3400 seats, and I bet they even have a problem filling those up.

Why do I say this?  Because they still call me for these Scientology events — and I’m a known SP (suppressive person), one of the people they’re supposed to shun.  Yet they call me — in a desperate attempt to get one more warm body into a seat, to look good for their cameras.  Like everything else they do, it’s all a photo op for them.  They used to Photoshop people into their pictures of events.  But the internet got wise to that and blew them out of the water.

So it’s better to have a smaller venue, where they can peddle the perception that their dwindling numbers are making the place look like it’s bursting at the seams — when nothing could be further from the truth.

L. Ron Hubbard’s birthday is the highest holy day in Scientology. If they can’t fill up the Shrine for that, then what’s Scientology-world coming to? In its heyday, they used to need overflow seating at the Shrine for this event.  Now they’re holding it at the Dolby, which implies they’ve got about half the membership they used to have — even counting the recent merger with Nation of Islam.

They’re still struggling to fill up half the number of seats.  The whole organization still has to drop everything to man the phones in the call-in section, to get people to confirm for the event.  And after they’re confirmed, they get called again to re-confirm.  And again to re-re-confirm.  That hasn’t changed.

So I guess people are still lying when they say they’re coming but then don’t show up.

And the fact that they’re still calling me — a known SP — speaks volumes.

Because of the Hollywood connection, Los Angeles has the highest concentration of Scientologists of any city in the world.  Yet they struggle to get 3400 people to come out?

They claim to have over 8 million members.  They claim to be “the fastest-growing religion in the world.”  If that’s true, then why are their event venues and audiences shrinking?

The evidence is in plain sight.