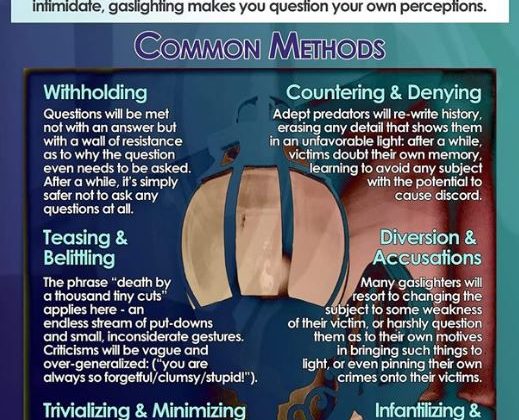 Looks like I’m not the only one who feels emotionally manipulated around here — and Scientology isn’t the only place where it happens.  Neither is Facebook.  Neither is the mainstream media.

I got an inkling of the way people feel about it when I posted this gaslighting infographic on my Facebook timeline and watched it go viral before my very eyes.  It was shared more than any other thing I’ve ever posted.

I’ve talked about the way Scientology does it here and here, and I wouldn’t be able to write about it, if I hadn’t seen (and experienced) so many instances of Scientology gaslighting.  But in the real world — the world outside of Scientology — it seems to be quite widespread these days.  Maybe it was always this way, and I’m just now waking up to the facts of life.

Once I started thinking about it, I began to realize how women have been putting up with it for years.  Longer than that, probably.  It might even go back to the myths and legends of pre-history — I mean, we call them myths and legends now, but at one time, they might have been truths that were systematically erased from the storyline of civilization.

I’m talking about how the Goddess used to be the main deity, until some men replaced Her with male gods of their own.  And then they kept those gods in place through various gaslighting techniques like the one in the diagram above.

But that’s just a myth, right?

Well then, why are women’s opinions, to this day, trivialized?

Remember that scene in “Downton Abbey,” when the earl is rebuking his daughter Sybil with the line, “I didn’t raise you to have opinions,” as if an opinion was the worst possible thing for a woman to have?

I’ve seen it in my own lifetime.  Women are gaslighted into thinking their opinions aren’t worth anything.  They might not have been as blatantly reprimanded as Sybil was though.  It more often comes in the form of some patronizing comment like, “Hahaha, little lady.  That’s so cute.”  Or, “Don’t you worry your pretty little head about it.”  Or having a male co-worker call you “sweetheart” in the office.  I’ve actually had these things said to me.  It’s sexist, but if you complain about it, you’re “imagining things.”

In Scientology gaslighting, if you disagree with an illegal order from some high muckety-muck, it’s more like “So you think you’re smarter than Grand Poobah So-and-So?”  So that you automatically conclude to yourself, Oh no, of course not.  How could I possibly be smarter than that guy, when he’s where he is, and I’m only where I am?

And in political gaslighting, it’s, “Show me a single racist remark he’s ever made.”  Right.  All those “fine people,” who happen to be white supremacists.  How can you possibly think that “fine people” is a racist remark?

It’s almost as if someone is advocating that you not trust the evidence of your own senses.  If you can be gotten into this frame of mind, then someone else can control the narrative — which then controls you.  (Click here for a possible remedy.)

I’m sure you can think of other examples of gaslighting.  You may even have experienced some.  Tell me about them in the comments.