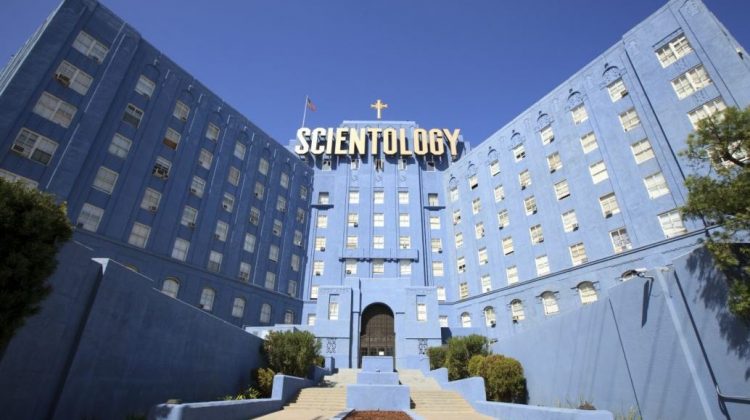 I have a considerably longer answer though, since the question took me back to memories of living conditions I’ve experienced in several of Scientology’s facilities.  I’ve been inside that particular blue building a few times, and it’s not a pretty picture.

Reports from others corroborate that opinion.  Even David Miscavige, the Little Pope of Scientology, agrees with me.  He calls it “pig’s berthing” and refuses to stay there on the occasions when he’s in town.  I had one client at my shop who complained of a scalp condition he couldn’t get rid of.  He said he’d traced it back to the time when he used to be a member of Scientology’s Sea Organization and had to live there and sleep on the filthy mattress they provided.

They talk about Scientology’s living conditions at exscientologykids.com, saying things like, “broken windows, broken doors, exposed sub-flooring, this was all totally normal… after a while you don’t see it anymore.”  And, “just another way to scare people into behaving.”  And, “the irony of ‘pig’s berthing’ is that all of the berthing was awful… so many code violations, from too many people living in a room to rooms illegally being divided into additional rooms….”

On ESMB, another person remembers pig’s berthing in Florida that had “no shower curtains, no heat or air conditioning, cockaroaches (though so what, all the rooms had those), spider webs everywhere, just a mattress on the floor, and birds living in the rafters.”

I’m surprised I wasn’t able to find a link to the “roach darbies” they used to have on the Flagship Apollo.  Does anybody remember those?  Roach darbies were some kind of ongoing contest, where prizes were awarded, according to the size of the roach nest you uncovered.  The place was full of them.  Prizes were announced in the Orders of the Day.

Well, that’s completely out of the question.  Old L. Ron justifies it with his philosophy on “Toughness” — which is a quality you have to have to thrive in the Sea Org.  Besides, “it’s only MEST” — Scientology’s acronym for material goodies, made up of Matter, Energy, Space, and Time.  And we’re not into MEST.  We’re spiritual, right?

Being into MEST makes you “PTS to the middle class” — in other words, the middle class is suppressing you.  And heaven forbid you should ever be PTS to anything, since being PTS disqualifies you from reaping many of the alleged benefits of Scientology.

All the while, on the other side of his face, Old L. Ron was grabbing all the MEST you had and stockpiling it for his own personal benefit.

Well, shouldn’t the Health Department come and inspect their facilities?  Good luck with that.  They’ve infiltrated the Health Department, so that they get forewarned when an inspection is imminent.  Then they rush around, cramming all those extraneous filthy mattresses and other assorted junk into temporary storage until the inspection is over — at which time they just go back to business as usual.

Can anything be done about it?  I don’t know.  But maybe it’s a more easily confronted aspect of the Scientology clusterf**k.  Just like people won’t stop smoking when you tell them smoking will kill them — but they might consider stopping, if you tell them it’ll give them wrinkles.  Or they never could convict Al Capone of anything to do with organized crime, but they got him on tax evasion.

Maybe — just maybe — many more people would be properly outraged about Scientology health code violations than they are about their alleged child abuse, human trafficking, and human rights abuses.  What do you think?