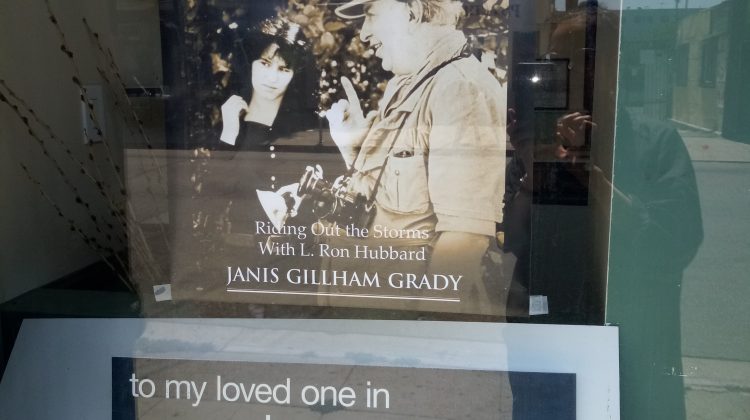 I have a new sign in my window at the shop that attracts a lot of interest.  It’s a poster, promoting Janis Gillham Grady’s second book in the trilogy about life on the Flagship Apollo, where I first knew her in her role as a Commodore’s Messenger.

I was a Flag Intern at the time, trying to get used to life on the ship, and not always succeeding at ignoring all the WTF moments that kept coming up.  I mean, this was the home of Old L. Ron, so one would expect conditions to be pretty close to ideal, right?

Aside from the fact that the Scientology ship Apollo was filthy and overcrowded, some of the things I saw just offended my sense of decency, though I was too intimidated to mention it at the time.

On the internship, we gave sessions to Apollo crew members.  One day, I had another one of Old L. Ron’s messengers in session.  He was a growing boy of twelve or thirteen, and I was “getting the rudiments in” at the beginning of the session — handling any momentary upsets, worries, or withholds — before starting on the major action for the session.

When I got to the question about “missed withhold,” he said he was withholding the fact that he ate some of the food in Old L. Ron’s refrigerator.  He had to confess that as an overt act in an auditing session.

I was supposed to take what he told me, handle it smoothly, and continue with the session, but I was shocked.  WTF kind of place is this that a growing teenage boy can’t eat food in the refrigerator of a place that’s supposed to be his home, without thinking he’s doing something wrong?!?

He was earning his keep, on post as a fully-fledged Commodore’s Messenger, and as I later found out, his boss was a demanding old coot.  Why weren’t they feeding him enough so he wouldn’t have to raid the refrigerator in the first place?

I didn’t know it at the time, but food (or the lack thereof) was used as a punishment in the Sea Org.

And then I found out about beans and rice.  That time when the stats were down, pretty much across the board.  We had just moved into the Land Base in Clearwater, so people who were doing administrative functions had to get their spaces set up before they could resume normal operations.  But that was no excuse.  The stats were expected to be up anyway.  Making an excuse for “downstats” was considered “suppressive reasonableness.”  So the Orders of the Day announced that the lunch and dinner menu would consist of beans and rice until the stats were up again.

Of course, the order said parenthetically, if your stats were up and you felt you should be exempt from the beans and rice, other food was also available.  Well, all an auditor had to do to be considered “upstat” was five hours a day in the chair.  And all I needed to accomplish that was the preclear, the folder, and a room for the session.  Even at the best of times, getting all three of those things happening was a logistical hassle.  So the move was actually an improvement for me, since there were more rooms available than there had been on the ship.

So I went through the cafeteria line and ordered the food I wanted.  I got some odd looks from my mess mates at the table.  They were all eating beans and rice.  Some of them might also have had up-statistics, but they were more concerned with sticking with the majority.  They didn’t want to alienate themselves from their teammates.

Well, I wasn’t so desperate to belong that I would deprive myself of the food I needed.  And the written order said it was OK for me to eat the other food.  But there was a subtext there that I still hadn’t grasped, and that was the basis for many subsequent moments of cognitive dissonance I experienced.  What was written was one thing.  But what was practiced was something else entirely.

And I never quite managed to get comfortable with that.