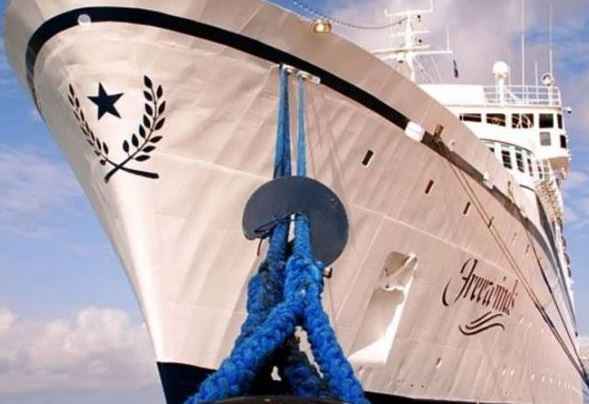 The news about the Scientology ship Freewinds in the Caribbean, quarantined because one of its crew members has the measles, has gone “viral” (pardon the pun) on the internet and has now hit the mainstream media.  ABC, NBC, Reuters, and USA Today have all had something to say about it.

They reported it with a straight face, but I detected a certain schadenfreude about it — as if they wanted to come right out and laugh in Scientology’s face about seeing the lowly rubella virus defeat such a super-human master race as homo novis, just the same as if they were the inferior homo sapiens species.

I’m not sure they fully recognized the irony of it — that the Freewinds is the very place where Scientologists go to achieve the level that’s going to make them cause over matter, energy, space, time, life, and thought.

I guess that doesn’t include measles, huh?

The current story reminded me of another time when Scientology superpowers failed on a Scientology ship in the Caribbean.  It was the Flagship Apollo, and there I was in the aft lounge, having pleasant dinner conversation, while Kima (Dunleavy) Douglas (R.I.P) stood in the middle of the deck and focused her best superpower stare in my direction, trying (and failing) to get me to shut up.

All I was doing was talking about the rumor that we’d all be leaving the ship soon and moving to land, according to what a member of the Commodore’s Staff (Allen Buchanan) told me when he met me at the dock to welcome me onboard the ship.

I had just recently come aboard and was still in the glow of exhilaration at having finally made it to the place where Old L. Ron made his home.  At that point, I still idolized him as “mankind’s greatest friend” and didn’t yet see him as “Ron, the Nut.”

So there I was, happily babbling away, with Kima looking daggers at me.  I was telling the truth as I knew it, so why should I shut up?  What was wrong with her anyway?  I had no idea about the politics of the place.  Totally clueless.

Kima knew all the secret skinny, since she was Old L. Ron’s personal caregiver, so she was practically a goddess on the ship — one of those people who had his ear and could do no wrong, since she was (at the moment) essential to Old L. Ron’s survival.  He could change his mind at any moment though, and when he did, it was best not to be in his line of fire.  But I didn’t know any of that then.  I had no idea how disastrous it was to have her mad at me.  And sucking up was not part of my skill set.

Jed, my buddy from DC, whispered to me that it was supposed to be a secret.  He’d found out from the fellow he’d been auditing, who was Old L. Ron’s personal steward.  Well, too late.  The cat was out of the bag.  Now all the people in the aft lounge were privy to this top secret information.

But if it was supposed to be such a secret, why did Allen Buchanan tell me about it before I even set foot on the ship?  He didn’t know me from Adam, and he didn’t even say it was confidential.  If he’d said so, I would have kept it a secret.  But he brought it up just like it was regular conversation.  I thought it was common knowledge.

And what was the big deal about keeping it all a deep, dark secret?  At that point, I still absolutely believed all the PR and hype, asserting that Old L. Ron was welcome in any port he cared to visit.  I didn’t know anything about the ship’s being thrown out of countries they’d been to.  But gradually, by reading between the lines when people I audited spoke of upsets connected to “PR flaps” in various ports they’d been in, I began to find out that all was not well.

In Tenerife, the locals were so upset with Old L. Ron and Scientology that they threw stones at the ship as it was leaving port.  Back in the day when a sense of humor was still allowed in Scientology, the crew used to call it the “rock festival.”

In addition, Old L. Ron was in flight mode from the IRS.  He was refusing to pay taxes in the U.S., after losing tax-exempt status as a “church,” when the IRS found out that the “donations” he was collecting were not being used for charitable purposes.  Instead, the money was going toward funding his cult guru lifestyle.  So if they found out he was about to set foot on U.S. soil again, they’d probably be waiting for him at the dock.

Plus, he was trying to stay at arm’s length from Operation Snow White — the infiltration of U.S. government offices Scientology’s Guardian’s Office was conducting at the time, on his orders — while he pretended he had nothing to do with the day-to-day running of the organization.

So of course Kima didn’t want me saying anything about the plan to move from a sea-going operation to a land-based organization.  I believed the PR about how much all those countries loved Old L. Ron.  But it was all lies, since the ship had somehow made itself unwelcome in several ports.

Most of the vivid memories I have of my time inside Scientology are milestones on my way out.  This one is no exception.  That moment when Kima was mad at me for no apparent reason might have been the first inkling that all was not as it appeared to be in Scientology.  It wasn’t the same in real life as Old L. Ron claimed it was in the books he wrote.  We were definitely not in Kansas anymore.

If you’re in Scientology, waiting for your superpowers to manifest, don’t hold your breath.  If there was ever a time to demonstrate them, it would have been when Kima wanted me to shut up in order not to blow the Old Man’s secret mission out of the water.  Why wasn’t she able to do a Darth Vader on me and render me mute?

And more recently, why couldn’t they make a simple case of the measles disappear?

Could it be that the superpowers they’re selling on the Scientology ship Freewinds are bogus?