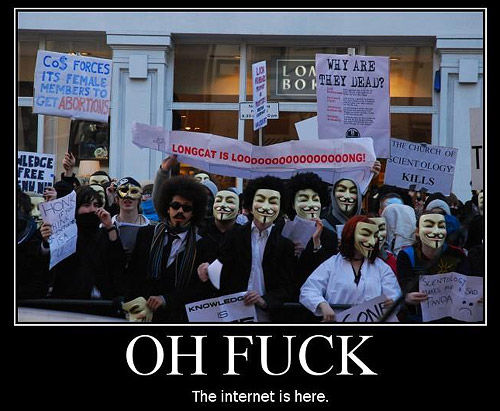 Since Anonymous appeared on the scene, Scientology has never been the same.  February 10th was the 11th Anoniversary of the beginning of Scientology vs. Anonymous.  Over 9,000 people came out all over the world that day in protest of the abuses of Scientology.  Here are some pictures to take you on a trip down memory lane.  About 300 people gathered at the Complex (aka “Big Blue”) in L.A.

Here are some of us, amassing at the corner of Sunset Blvd. and L. Ron Hubbard Way.  I guess we took them by surprise, or they would have had their “wall” tech in place, preventing our irreverent feet from desecrating the area with our happy-dancing.

We had music and dancing and caek.  Everyone had a fun time.  Except the folks from Scientology’s once all-powerful Office of Special Affairs (OSA), whose intimidation tactics didn’t seem to be working.

Scientology, with its usual “subtlety,” sent a fake ice truck to infiltrate the movement.  How could they think they wouldn’t be spotted?  They had no idea who they were dealing with and grossly underestimated how smart these people are.  This marked the beginning of Scientology vs. Anonymous, as all Scientology’s “scripture” mandated what the proper answer should be when someone opposed them.  Anonymous found all their knee-jerk reactions very interesting, so they stuck around for months, just to see what would happen next.

Scientology had never seen anything like it.  Nobody had.  Until these kids came along, nobody had ever dared to stand up to the bullies that they were.  Anonymous was forcing them to show their true colors, out in public where everyone could see.  The Old Guard exes and critics particularly enjoyed themselves, witnessing a protest of 300 people instead of the usual three or four.  Here are Tory Christman, Mark Bunker, and Graham Berry, enjoying the beginning of Scientology vs. Anonymous.  (I don’t know the other lady’s name — if somebody does, please let me know, so I can acknowledge her.)

I was there too.  It’s right around the corner from my shop.  Going through my memorabilia, I found this newspaper clipping from a brief interview with David Sarno, a staff writer from the LA Times.  He spelled my name right and everything!  Thought I should take a picture of it, before it falls apart. 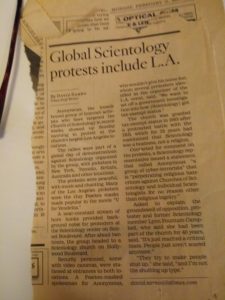 The movement continues to this day.  Scientology doesn’t know it — or maybe chooses to stick their head in the sand in their typical fashion and just not acknowledge it, while continuing to proclaim themselves the “fastest growing religion in the world.”  Anonymous opponents are hard to see.  Like, they’re anonymous, right?  But this protest proves they’re out there.  In strength and numbers.  Which only increase as more people leave Scientology and become “anonymous” themselves.

So — where are all the OT’s who are supposed to be “cause over life”?  Aren’t they supposed to be able to make such people disappear?  How about the people who are trained on the SP-PTS (Suppressive Person – Potential Trouble Source) tech to be able to “shatter” suppression?  Why were all those SPs out there, having such fun?  Could it be that “the tech” doesn’t work?  If Scientology tech doesn't work, then what are they selling for all those hundreds of thousands of dollars? Click To Tweet