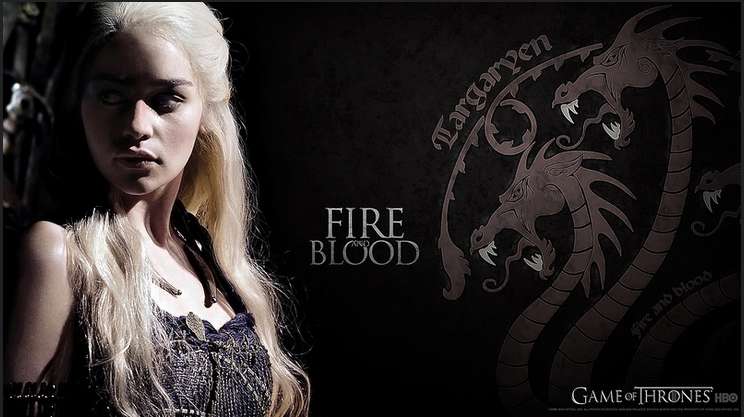 Seen any good movies lately?  Now, that’s a frequently asked question here at the shop.  Well, yes.  As a matter of fact I have.

“Game of Thrones”  wouldn’t officially be classified as a movie though.  It’s a long-running TV series — the best one HBO has, if you ask me.  Let me tell you a little bit about it.

From the very beginning, you get the idea that it’s going to be an epic, with lots of twists and turns to the story.  And it does not disappoint.  The overview is that there are seven kingdoms on the continent of Westeros — seven kings, vying for the right to rule over all of them.  So you know there’s going to be war and violence, not just for its own sake though.  It just comes with the territory.

With the shift from the comparatively simple country life of Ned Stark’s (played by Sean Bean) Winterfell in the north to the more complex palace intrigue in Kings Landing in the south, the plot — as they say — thickens and becomes vastly entertaining, complete with sex, naked women, and shirtless men.

Some aspects of it remind me of my adventurous young adulthood in Washington, DC.  Oh, the politics — interoffice and otherwise!

Season 1 mostly fills you in on the back stories of some of these kings, while moving the story forward at a steady pace.  You meet the characters you love and the ones you love to hate.

My favorite female character is Daenerys Targaryen, a princess-in-exile whose father — the former king — was deposed by the current king, Robert Baratheon (played by Mark Addy).  I have to mention her hair, which is naturally a major attraction for me.  It’s not just that her hairstyle is the best.  It’s also that her character, in my opinion, shows admirable strength in playing the cards life has dealt her.  Her middle name — Stormborn — establishes her from day one of her existence as a force to be reckoned with, as it conjures up the picture of her calmly and inevitably going about the business of getting born, regardless of the storm raging all around her.

My favorite male character is Tyrian Lannister, brother of the queen (Cersei Lannister, played by Lena Headey).  Tyrian deals with being a dwarf — and the attendant name-calling and contempt — with a delightfully urbane snark that gives you the impression that you would underestimate him at your peril.  Because of his physical disadvantage, he’s had to defend himself with his wit all his life, so has become a master at it.

Khal Drogo deserves a mention here.  He’s played by Jason Momoa, whom I loved as Ronin in the series “Stargate Atlantis.”  In “Game of Thrones,” he plays the barbarian mate of Daenerys Targaryan.  As the relationship develops, he becomes kinder and gentler (towards her anyway), and she becomes wilder and freer.

What would an epic medieval fantasy drama be without an element of the supernatural — which comes into play when you learn about the Wall at the far north of Westeros and the men of the Night’s Watch who guard it and protect the realm from what lies beyond it.

All the characters are multidimensional, which hints to me that this story goes deep, so you have to pay attention to keep up.

And the music!  It weaves in and out of the plot — and the various subplots — to transport you to a different world.

This series gets five stars (out of five) from me.  It engages all your attention, and if you’re looking for a brief, pleasant escape from the too-real world around you, “Game of Thrones” fills the bill.  It’s an epic epic.

“Game of Thrones” airs on HBO.  It’s about to go into Season 6 at the time of this writing, but if you missed the beginning (like me), you can buy and stream it on Amazon.
Try Amazon Prime 30-Day Free Trial