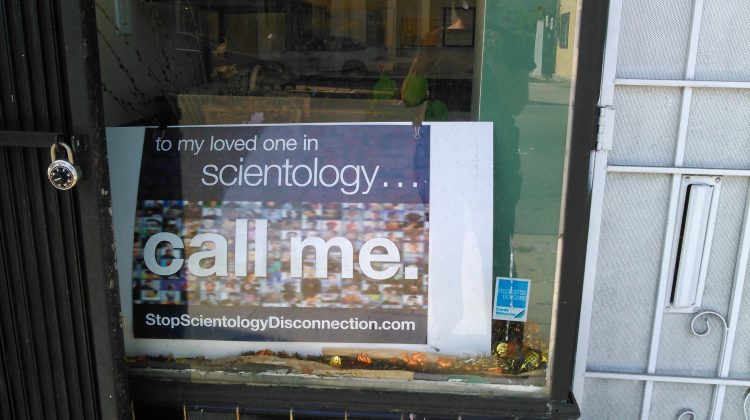 People sometimes wonder why I have signs in my shop window protesting the abuses of Scientology.

To me, it seems obvious, but I forget that not everybody grew up the way I did.  My mother took it seriously, when she learned of the saying, “All that is necessary for evil to triumph is for good men (or women, in her case) to do nothing.”  (Edmund Burke)

In her youth, she sued the State of North Carolina for equalization of teachers’ pay, when she found out that Black teachers with Master’s degrees earned less than white teachers with Associate’s degrees.  Then, of course, she had to get out of town, running from the Ku Klux Klan.

And later, my sister and I participated in civil rights actions back in the day.  It was unthinkable to remain silent and inactive, when there was something we could do about it.

I suppose being brought up this way is a sort of privilege – though not the kind that has money attached to it.  It’s still a privilege to be able to live with yourself.  To look at yourself in the mirror and (except for the signs of aging) not cringe.

Protesting the abuses of Scientology is “not sensible.”

In the short run, it’s not sensible for me to have signs in the window, protesting the abuses of Scientology.  They’re so big, and I’m so small.  But in the long run, I’d have major regrets if I didn’t do it.  My shop is in the perfect place for it.

The signs change from time to time, depending upon who needs support.  Right now, I’m supporting Phil and Willie Jones, whose children are in Scientology’s elite Sea Organization.

The kids were made to disconnect from their parents, who left Scientology.  Phil and Willie haven’t seen or spoken to their children in years.  All they want is for their kids to call once in a while.  So they took out a billboard ad near one of the buildings where their kids work.  My current sign is a replica of that billboard.

Scientologists used to call me on various pretexts, to try to get me to take down the signs.  Others, who may or may not have been affiliated with the org, have come forward out of the goodness of their hearts “to help me with my business.”

“First,” they say with great enthusiasm, “we’ll re-do the windows, and….”

If it helps even one person…

The signs must be having an effect.  Otherwise, they wouldn’t be trying to get me to take them down.  I know of at least one person who reconnected with family because of those signs.

Another time, someone approached me wanting to share the space and implying she was willing to pay almost twice what my current rent is.  I later found out she’s in the Sea Org.  Coincidentally, this was just after the landlord sent me a new lease to sign, which included automatic rent increases.

Knowing what I know about the way Scientology operates, I wouldn’t be surprised to find that that was part of a coordinated effort.  The person who approached me would have been the answer to my prayers and the solution to the rent increase.  Just a coincidence, right?

So having a sign in my shop window is my way of protesting Scientology’s abuses.  Now that they’ve disconnected from my business and I’m no longer at their beck and call all day every day, I’ve semi-retired.  The signs allow me to register my protest 24/7, whether I’m there to talk about it or not.

No doubt, they want me out of there, since it’s so close to what they consider their turf.