Remember when I said, “If it all starts to go horribly wrong, we’ll know I’ve become a victim of the Scientology fair game policy”?  Well, just when I was about to go quiet again, because I had nothing on my mind about a certain criminal cult, they gave me something to talk about.

When I went to the shop last Sunday, I saw some water damage from a leak in the roof near the front of the shop — and a crack in the wall near the back that wasn’t there two weeks ago.  I notified the landlord, and he sent his guys over the next day to check it out.

So I can’t go quiet now.  That’s what they want me to do.

I thought the crack in the back was also some kind of water damage, since it’s been raining pretty heavily over the last couple of weeks.

So when the guys came over so I could show them what’s going on, they checked out the leaks in front.  They thought it was odd.  The roof is practically brand new.  How could it have developed such a bad leak in so short a time?  But he could see it.  The ceiling tiles were sagging and everything. 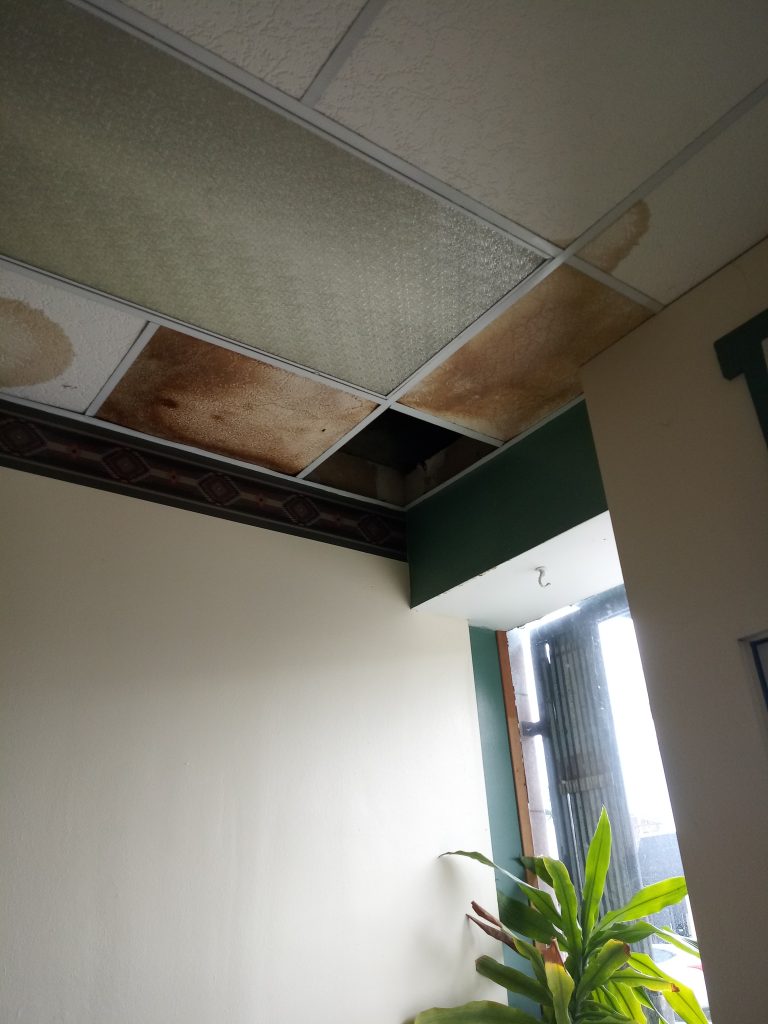 Yes.  I agree.  It’s very odd that such a big leak would develop in a roof that’s brand new.  They said they’d even been up there and looked around and didn’t see anything.  Very weird.

Then I showed them the crack in the wall in back.  The lead guy pushed on it and listened and said it wasn’t water damage.  Then they left, and I closed up to take the traditional salon day off (Monday).

As I was driving out the driveway, I noticed some marks on an unused side door that’s been boarded up for decades — and plastered over on the inside.  Nobody has noticed that door, or done anything damaging to it in the 25 years I’ve been in the shop.  But all of a sudden, on this day, it looked like somebody had taken a crowbar to it and tried to break in.

Now, maybe this was just some “innocent” vandalism.  But in my experience, this is what Scientology fair game action looks like in its current incarnation.  If I had tried to report the roof was leaking without showing somebody the damage, the landlord would have said (and thought), “That’s impossible — the roof is brand new.”  And he would have been right.

And the “attempted break-in” marks on the side door stopped just short of doing major damage.

This heavy-handed gas-lighting has the criminal cult’s vibe all over it.  It’s the kind of thing that used to terrify me.  But I’ve had to revise the way I feel about it now (i.e., no feeling at all).

Tactics like this are supposed to make me think I’m a victim of the Scientology fair game policy and  terrify me into shutting up.  And that’s exactly why I’m saying anything in the first place.  If it weren’t for tactics like this, there wouldn’t be any reason for me to speak up.  I would have just thought it was ordinary wear and tear that made the roof spring a leak.

But a leak that big in a brand new roof?  Well….

And just to make sure I couldn’t really write it off as ordinary wear and tear, the finishing touch of the “attempted break-in” was the icing on the cake.  Just enough damage so you’d notice somebody was doing something, but not quite enough to report to the police.  They decriminalized that kind of property damage a few years ago.  Now Scientology fair game perpetrators can operate with relative impunity.

And neither the landlord nor I would even file an insurance claim for something that small.  So the shop will never be made completely whole again, which is why one doles out all that money for insurance in the first place.

They did that to a car of mine once — you know, a little scratch here, a little broken trim there, and pretty soon my neat little car looked like a piece of junk — all from little individual “wear and tear” incidents too small to file an insurance claim for.  You can’t really prove it was Scientology fair game.

This happenstance is just a cost of doing business in a neighborhood where a criminal cult is allowed to flourish.  However it came about, I’d like to thank the individual who did it for reminding me that abuses are happening, and this is no time to stop speaking up about them.  I’m inspired.

By the way, I see Leah Remini and Mike Rinder are going after the cult’s tax-exempt status.  I can understand the frustration cult management is feeling about that.  But harassing me out of my shop with Scientology fair game tactics is not going to solve it.  Even if they do succeed in chasing me away, they’ll still have the impending disaster of the loss of their tax-exempt status to worry about, won’t they.  🙂

More power to Leah Remini and Mike Rinder for questioning whether a criminal cult deserves tax-exempt status. Click To Tweet

So what do you think?  Is it vandalism, or Scientology fair-game policy in action?