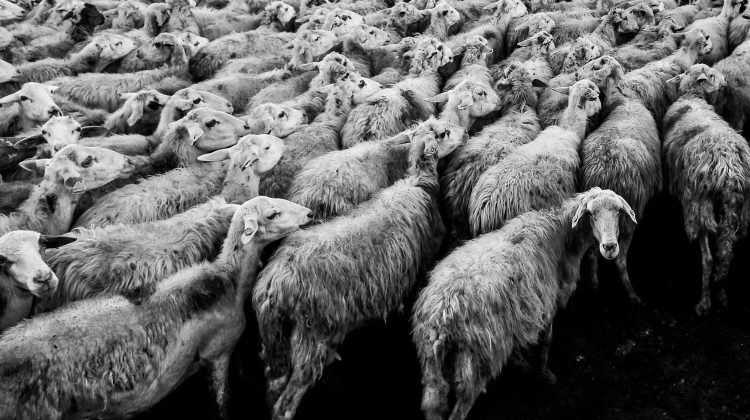 Scientology cult-think is the only thing that “keeps Scientology working.”  Old L. Ron said so himself.  The only way to do it is to absolutely prohibit any other way of thinking.  Paraphrasing his words, you have to knock it out, hammer it out of existence, and close the door on it.

In Scientology, being “open-minded” and “reasonable” are bad things, because that’s how “incorrect” technology seeps in.  There’s only one right way to do anything in Scientology — “my way or the highway.”  No kidding.  Black and white thinking.  There are no shades of gray

This kind of thinking can make you into some politician’s “useful idiot.”  You see it on Facebook all the time.  Scientology cult-think carries over into the lives of people who claim to be “former” cult members.  If you’re still thinking like a cult member, you’re still in a cult — no matter which end of the political spectrum you’re on, and no matter what group you’re in now.

If you’ve ever been unfriended on Facebook for trying to talk sense into some political extremist, you’ll know what I mean.  It makes you wonder how people get that way.

The way it’s done in Scientology is by way of a process known as the Dissemination Drill.  I can see the same formula in play in politics.  Politicians will play on the same buttons Scientology uses to “find your ruin” and offer you their solution.

Scientologists will say, “What’s ruining your life?”  And no matter what you say, they come back with, “Well, Scientology can handle that.”  Instead of that, politicians will say something like, “scared of having your wealth redistributed to those shiftless, no-account, poor people?  Vote for us, and we’ll fix that.”  Or, “scared of having what little you’ve got given away to somebody who’s not as superiorly white as you?  Vote for us, and we’ll fix that.”

Cult leaders of all kinds use this formula, except that the solution varies, according to what they’re selling.  So people fall for it, no matter how cult-proof they think they are.

Politicians are all making it up as they go along — always sending you “surveys” to fill out, to find out what “issues” you want them to address.  And no matter what you say, their next step is, “Oh yeah, we hear you.  We can fix that, if you vote for us.  Oh, and by the way, we need money to get that done.  Will you give us some?”

So that’s the formula.  Old L. Ron had it down pat.  He called it the Dissemination Drill, and it has four steps:  (1) contact, (2) find the ruin, (3) handle any objections, and (4) bring to understanding.

In Scientology, they send people out on the street to do the contacting.  Ideally, the person they send out will also be able to do the other three steps too, before bringing their new guy back to the mothership.  But more and more, as the people who are trained to do this wake up and leave, they’re forced to make do with having these “body routers,” as they’re called, take a shortcut.

Those people you see in the street handing out “free” tickets are just contacting and luring people in with the offer of something free.  The other steps are done inside.

The way the contact step works with politicians is they ask a loaded question online to get you to click through.  Then they want your email address, so they can do the rest of the steps on you at their leisure.  What they both have in common is that once they have your contact information, you can’t get off their list, no matter how many times you ask, and no matter how many times the dialog box pops up, saying you’ve been successfully unsubscribed.

The next step — finding your ruin — Scientology does it in person directly asking, “What’s ruining your life?”  They go for the jugular, probing for where you’re vulnerable, so they can “help” you.  The really skilled ones can do it in one conversation with a stranger on the street.

But not everybody has this skill, so they have to drag you back to the “org” for a “free” personality test, which is supposed to reveal some low points where they can dig around.

If the test results don’t show any low points, then, “You know what your problem is?  You’re not facing reality, and that’s going to backfire on you one day, if you don’t handle it right now.  You’re lucky you came to us in time.”

See?  If they can’t find a vulnerability, they will make one up.  If it ain’t broke, they will try to fix it anyway.

Politicians will give you a long list of “issues” to choose from, so that if you weren’t aware of any of these “problems” before, you are now.

The third step is to handle any objections that are going to get in the way of assimilating you into the cult.  If you’re not welcoming them with open arms and waiting breathlessly to embrace their solution to the problem that’s ruining your life, you’ll have to be “handled,” to get you into the frame of mind where you want to hear what they have to say, so you’ll latch on to their solution — whether it’s personal or political — as the answer to your prayers.

Otherwise, their proposed solution will go over like a lead balloon.  If they’ve been successful so far, by this point you’d love to believe what they have to say.  You’d give anything to believe there’s a solution to what’s ruining your life.  They’re looking for a way to tap into your willingness to believe.

And once they do, then voila!  They have a new cult member.

Even people who are otherwise intelligent fall for this all the time.  I’ve met doctors, lawyers, and people with other advanced academic credentials — who are also adamant Scientologists, drinking deeply of the kool-aid.  You’ll see celebrities claiming how “Scientology saved my life,” and/or donating tens of millions of dollars to this cult.  How did they get this way?

Somebody did a very skillful “dissemination drill” on them.

It could happen to anybody.

But now that you know how it’s done, forewarned is forearmed.